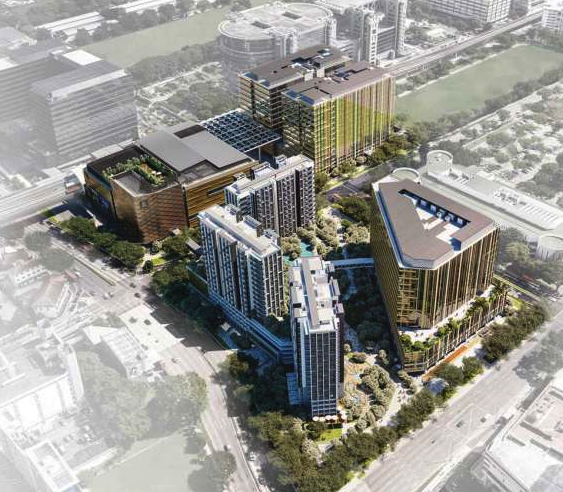 Australian developer Lendlease is jumping on the co-working bandwagon and taking its employees along with it. Co-working spaces are working environments shared by people employed by different companies. One hundred of its five-hundred-and-fifty staff here will be moving into a co-working space at OUE Downtown in the Central Business District, partially in preparation for similar zones at its own upcoming office towers at the Paya Lebar Quarter (PLQ).

Lendlease chief executive Tony Lombardo said the company’s PLQ development would “definitely” have a co-working element. The PLQ project is expected to have about one million sq ft of Grade A office space across three 13- to 14-storey blocks and accomodate around 10,000 workers. Lendlease said it is in talks with multinational corporations over the leasing of space there.

The developer will be hoping to replicate the success it has enjoyed at its A$6 billion (S$6.4 billion) development in Barangaroo South, Sydney. Lendlease built three skyscrapers there of 2.8 million sq ft, to the entire Sydney Central Business District.The three towers has committed leases for almost full occupancy. The floor plates of the PLQ offices will be large, similar to those of the Sydney towers, ranging from 2,200 sq m to 3,000 sq m.

PLQ would be a “new place in Singapore in terms of connectivity and quality of the environment” according to Lendlease. The company is keen on expanding its urban regeneration portfolio and wants to win at least two to four urban regeneration projects in the next five years in Asia. Naturally, it has its eyes set on Singapore’s master developer projects.