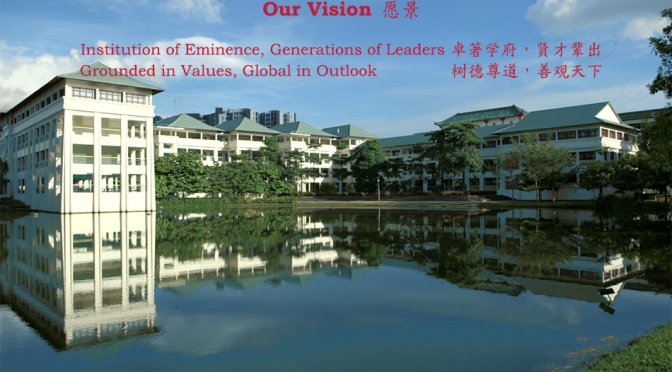 A rich heritage in the arts and the spirit of “yin shui si yuan” – the Chinese saying for remembering one’s roots – are qualities Chung Cheng High School will celebrate to mark its 75th anniversary.

As part of the festivities, Prime Minister Lee Hsien Loong yesterday officiated at a ceremony to gazette its administration building and the entrance arch of its main campus as a combined national monument.

The administration building, designed in the Chinese National style, has been the school’s “heartbeat”, he added.

It was completed in 1968, with funds raised over 20 years. Officially opened by former prime minister Lee Kuan Yew, the building housed the largest auditorium in Singapore at the time.

Mr Pang said the building has housed, over the years, performing arts and sports activities, the old library and, today, the school’s heritage gallery.

He praised the forefathers for the legacy and their vision, foresight and perseverance.

The administration building and the arch will be Singapore’s 66th national monument. It joins nine other school buildings which have also been preserved.

Urban planner and chairman of the Centre for Liveable Cities Liu Thai Ker, a Chung Cheng alumnus, said the gazetting shows the Government recognises the importance of historical buildings.

“The architectural style is quite distinctly Chinese. Recognising it is reinforcing the importance of respect for tradition.”

Also celebrated yesterday was the school’s rich cultural history and its reputation for grooming a pantheon of artistic talents from the late 1940s to 1960s. PM Lee opened the new Lim Tze Peng art gallery, named after the artist and Cultural Medallion winner who donated some 100 artworks to his alma mater.

Mr Lim, 94, said it was an honour to give back. He was from a poor family, and the school had let him study for free and even given him a job at the school office.

“Chung Cheng loves me and I love my alma mater, too,” he said in Mandarin.

He hopes his works will inspire students to be interested in art.

Dr Liu, 76, had been tutored by Mr Lim in art and calligraphy when he was in school. His father, pioneer artist Liu Kang, had also taught there. Reminiscing about the vibrant art and Chinese drama scene, Dr Liu said: “There was a strong emphasis on history, culture and tradition.

“It became part of the overall ambience of Chung Cheng.

Are you looking at opportunities for Japan Real Estate? Come to our Property Gallery which will be held on 17/18 March 2018, at Hyatt Hotel Singapore, from 1 to 5 pm. Call David King @ 94772121 for more details.